Industrial cybersecurity relies on several widely-accepted standards and data sources, all of which share the same purpose: reduction of organizational risk, including prevention or mitigation of cyber-attacks. Which standards (e.g., NIST, IEC 62443, NERC, ISO 27001) to adopt depends on each organization’s sector, locale and specific needs.

In this post I will cover CIARA’s compliance with the IEC 62443 standard  (in addition to IEC 62443, CIARA has been designed with the flexibility to comply with additional standards, e.g. NIST, ISO 27001 and others.)

In addition, I will discuss CIARA’s usage of TTP (Tactics, Techniques and Procedures) data sources such as MITRE and Radiflow Labs ATTs (Adversary Tactics and Techniques), and how CIARA automatically links between data sources and standards. As an example, I’ll describe the linkage between the MITRE ATT&CK framework and the IEC 62443 standard in CIARA.

The widely-used IEC 62443 security standard deals with securing industrial automation and control systems (IACS). It has been adopted by many companies in different locales and sectors, including energy, food & beverage, general industry and building management.

While large in scope, IEC 62443 is highly structured. It is divided into 13 parts by subject, each covering different aspects of industrial cybersecurity. The standard is based on a number of key principles:

MITRE ATT&CK is a globally-accessible open-source knowledge base of adversary Tactics, Techniques and Procedures (TTP) based on real-world observations.

The ‘CK’ in ‘ATT&CK’ stands for Common Knowledge derived from Radiflow Labs’ ATT’s, that are added to the MITRE model.

MITRE is used for analyzing attacker activity, from reconnaissance and resource development through initial access into the network, lateral movement inside the network and advanced stages of the attack.

CIARA incorporates an algorithm created by Radiflow’s research team for cross-referencing between the threat landscape (specific attacker groups, attack techniques and corresponding mitigations) unique to each network sector and region, with the IEC 62443 standard.

Unlike other tools on the market that make static use of MITRE, CIARA identifies the adversaries and attacker techniques (and corresponding mitigations) that are relevant to you, and then assigns a weight (calculated by Radiflow researchers) for calculating mitigation effectiveness in relation to specific risk scenarios.

On top of that, CIARA serves as a true simulation engine, not just for a single adversary attack vector, but for simulating multi-attack instances utilizing hundreds of propagations within the model.

CIARA’s integration with MITRE takes advantage of MITRE’s dataset of mitigations as well as Radiflow’s recommendations, associated with different attack techniques. For example: MITRE mitigation M1051 (“Update Software”) is associated with many attack techniques, one of which is the T1195 technique (“Supply Chain Compromise”, which recently made headlines with the SolarWinds attack).

Using the Supply Chain Compromise technique, adversaries can manipulate products or product delivery mechanisms prior to receipt by a final consumer, for the purpose of data or system compromise. This technique can be mapped to the IEC 62443-security requirement (SR) 3.4: “Software and information integrity”, which requires that “The control system shall provide the capability to detect, record, report and protect against unauthorized changes to software and information at rest.”

The result is a comprehensive mapping of each security requirement (SR) in IEC 62443-3-3 with its appropriate MITRE mitigation(s).

Generally, we have found that linking standards to multiple reliable data sources has resulted in increased risk assessment accuracy and improved cost-effectiveness of security mitigations, as the algorithm indicates the mitigations most suitable for each specific network, based on its unique threat landscape (i.e. sector and region). 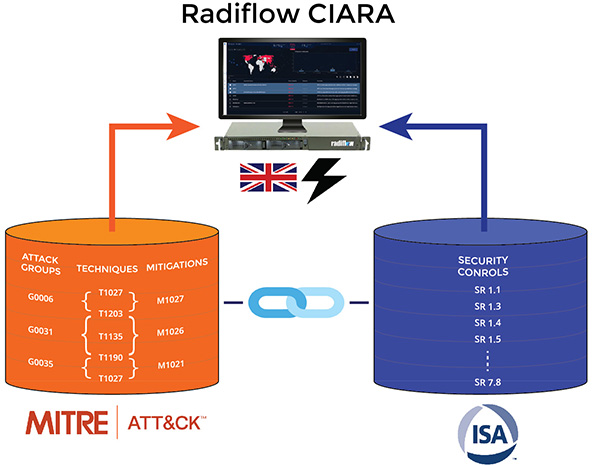